Ashley Russell and Philharmonic (aka Nic): 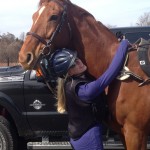 Ashley has a talent for re-schooling horses that have had set backs in their careers or whose owners have given up on them.  Her current competition horse, Nic,  had a devastating accident with a former owner, where he broke his whither, pelvis, and tail.  His confidence was shattered along with his majestic body.  Through patience and consistent work, Ashley helped show him how to use his body again as well as trust in her ability to guide him back to where he could rediscover his confidence and qualify for the 2014 AEC’s.  “ I am so proud of how far this horse has come.  He has the heart of a lion and I am so privileged to take this journey with him. “  Ashley and Nic finished in 13th place at Nationals on their Dressage score after 2 double clean jumping rounds.  They won the Open Novice division at the Fall Seneca Valley Pony Club Horse Trials and qualified to go back to Texas for the 2015 American Eventing Championships.  Ashley is looking forward to competing Nic at the Novice level again in 2015. They will be trying out some new venues as well as setting their sights on competing at the Waredaca 3 Day.  They will be schooling Training level and contemplating a move up at the end of 2015.  Ashley is also looking forward to coaching and supporting the other BABS team members as they achieve their goals at various competitions throughout Area 2.  Ashley’s full bio can be found under the TRU Story link. 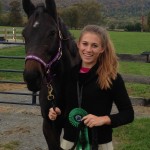 Talia started riding at a hunter barn at the age of 5. When she turned 13 she discovered show jumping and purchased her first horse, an opinionated OTTB chestnut mare. At 18 Talia started working for a 4* rider and discovered her passion for eventing.

In 2011 Talia was “gifted” a free, OTTB mare named Cindarra (Aria) who has since earned the nickname “donkey” for her generally ridiculous attitude. Aria arrived with several lameness issues, a general dislike of people and the strong desire to crib on everything.  Aria and mom have managed to work through these series roadblocks and successfully complete several HTs and CTs in the past few years.  They are incredibly grateful to wonderful team of horse-people who keep Aria sound and doing what she loves – jumping around XC! With the amazing support and care at TRU they’re hoping to be galloping out of the start box for the 2015 season – ultimately making a come-back at the recognized levels.

When Aria isn’t bolting out of the dressage ring or standing in buckets of ice/liniment/poultice you’ll find her eating peppermints (her favorite) or soaring around a course of jumps with mom. 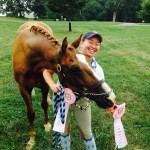 Jen Valentine has a lot to be thankful for when it comes to her awesome Morgan gelding, “Mischief Managed,” aka Jimmy.  His name fits him to a tee (actually, we should probably call him “Mischief Unmanaged,” but who’s keeping score 😉 ), because this is one horse who knows how to have a good time!  And while he’s busy showing us his 24/7 party animal, he’s also managed to help Jen build her confidence and remember how much fun all of this can be!  Jen has always ridden either Morgans (she grew up in CT…they are everywhere!) or Thoroughbreds, and is possibly a little biased about both.  😉

After starting the 2014 season not setting foot in the ring for 6 months, with Ashley’s guidance they finished on their first HT together at Loch Moy, which you would *never* have been able to convince Jen would happen if you’d asked her six months ago!  That said, these two are super excited for their future together, because it is blindingly bright…but if you’re gonna hang with them, you’d better be ready to get your party on!  This is one team that has overcome their bumps in the road to really, truly, enjoy ever moment together.

Jen also sends lots of props and love to the always fabulous Saratoga Slim, her first event horse, who is now retired at TRU Liberty.   Slim was a star, and we all love him!  He is the best big brother to Jimmy.

But there will never be any horse who eclipses Jimmy, and the way he makes sure that, no matter what, he shows his mum how to trust him.  One in a million…this little Morgan that could. 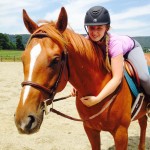 Marksmanship also known as Champ, is a 5 year old thoroughbred that I have raised since he was a month old. I started him very slow with first working on ground work, then under saddle when he turned 4 and finally started jumping him when he turned 5 last march. I wasn’t in a rush which is why I took my time with him.

I have a background in the hunter ring and showed through college. This has made my technique great but not very practical. When I made the decision to move my horse to TRU Liberty I quickly got introduced to eventing.

With the help of Ashley Russell, Champ is coming along in his training and has gone to two starter trials so far. I love being part of BABS Eventing because it surrounds you with wonderful and encouraging friends.

I can’t wait to see how far Champ and I will grow this next season. We will start in the elementary starter trials and hope to move up to beginner novice! 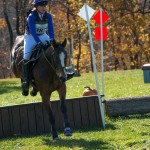 Terri Ehrenfeld found her partner Corey in 2011 after a four decade hiatus from riding. He was a green three year old TB/QH cross. She was an even greener 50-something. However, they proved the exception to that old adage “green + green = black & blue.” They thrived together. Terri and Corey discovered the sport of eventing—and Babs Eventing—at Adult Eventing Camp at Loch Moy Farm in 2013. Ashley Russell, founder of Babs, helped Terri and Corey on day one with her practical advice on how to keep a greenie’s mind productively occupied, instead of focused on the scary things Corey suspected were hiding in the Loch Moy woods, just waiting to eat him.  By the end of camp, both Terri and Corey decided they loved eventing—and that they were staying close to Ashley and Babs. They happily became part of the Babs Eventing team. Terri and Corey are located in Maryland, and join the Virginia members of Babs for workshops, lessons, competitions, and fun and games. Corey and Terri love to jump most anything, so their challenge is to further their dressage skills. After competing at the Elementary level in 2014, they are planning to compete at the Beginner Novice level in 2015.